Clippings from The Tower

Fulton J. Sheen's rise to prominence on the Catholic University campus is chronicled in the pages of its student newspaper. In 1927, at age 30 and in his first year of teaching at Catholic University, Father Sheen was selected to preach at the annual Mass on the feast of St. Thomas Aquinas. A decade later, it was Monsignor Sheen who was the principal speaker at the University's Sesquicentennial Celebration.

The Tower archive contains 181 articles that mention Sheen. A selection of these articles is presented on this page. 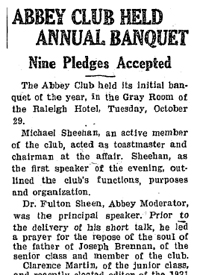 Dr. Fulton Sheen, Abbey Moderator, was the principal speaker. Prior to the delivery of his short talk, he led a prayer for the repose of the soul of the father of Joseph Brennan, of the senior class and member of the club.

END_OF_DOCUMENT_TOKEN_TO_BE_REPLACED 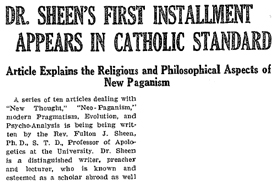 A series of ten articles dealing with "New Thought," "Neo-Paganism," modern Pragmatism, Evolution, and Psycho-Analysis is being written by the Rev. Fulton J. Sheen, Ph.D., S.T.D., Professor of Apologetics at the University. Dr. Sheen is a distinguished writer, preacher and lecturer, who is known and esteemed as a scholar abroad as well as in America. Perhaps, no one today is better fitted than he to repel the present-day assaults on religion.

Dr. Sheen's first article which appeared in the Catholic Standard and Times' edition of Saturday, January 18, deals with the New Paganism. The article explains the question, gives a Catholic analysis of it and suggests means of attack.

END_OF_DOCUMENT_TOKEN_TO_BE_REPLACED 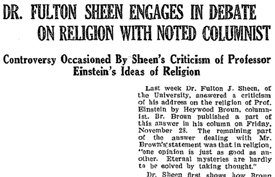 "It is, therefore, not matter, but the spirit, which summons the best in men - the spirit of learning, the spirit of truth, the spirit of life - and all these are above the individual man in dignity and worth. … Every truth the scientists seeks is but a syllable of the great truth that God is the Maker of the World; every discovery is a peek into the treasure-house of the Divine Arcana; every sacrifice for friend, and for science, is ultimately and in the philosophical order, a splinter of a Cross on which was laid the Timeless in time and the Spaceless in space, the Infinite Lord and Creator of the Universe."

END_OF_DOCUMENT_TOKEN_TO_BE_REPLACED 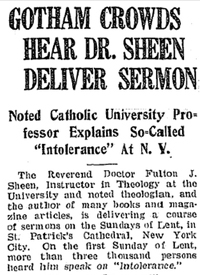 On the Second Sunday of Lent, Doctor Sheen spoke in St. Patrick's on "Dogma." On the remaining Sunday evenings during Lent, he is to speak in St. Paul's Church, New York, commuting between Washington and the metropolis, so that his pulpit activity does not interfere with his regular work.

Those who have heard Doctor Sheen speak appreciate the great privilege that is given the Catholic people of New York in hearing this noted preacher. Doctor Sheen, who since 1926, has been on the faculty of the University, studied in Louvain and Rome, and taught in England before returning to this country, and today, is one of the best known preachers of the Catholic Church in America.

END_OF_DOCUMENT_TOKEN_TO_BE_REPLACED 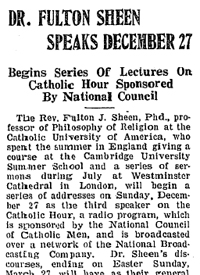 The Rev. Fulton J. Sheen, Phd., professor of Philosophy of Religion at The Catholic University of America, who spent the summer in England giving a course at the Cambridge University Summer School and a series of sermons during July at Westminster Cathedral in London, will begin a series of addresses on Sunday, December 27, as the third speaker on the Catholic Hour, a radio program, which is sponsored by the National Council of Catholic Men, and is broadcasted over a network of the National Broadcasting Company. Dr. Sheen's discourses, ending on Easter Sunday, March 27, will have as their general theme, "Christ in daily life."

While in England, Dr. Sheen delivered a special sermon for the Converts' Aid Society for the benefit of the convert clergymen in the Oratory Church in London. This past summer was the fifth year in which Dr. Sheen has been invited to preach at the summer conferences.

END_OF_DOCUMENT_TOKEN_TO_BE_REPLACED 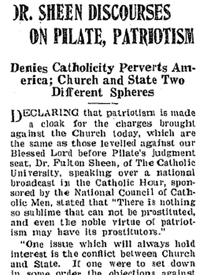 Declaring that patriotism is made a cloak for the charges brought against the Church today, which are the same as those leveled against our Blessed Lord before Pilate's judgment seat, Dr. Fulton Sheen, of The Catholic University of America, speaking over a national broadcast in the Catholic Hour, sponsored by the National Council of Catholic Men, stated that "There is nothing so sublime that can not be prostituted, and even the noble virtue of patriotism may have its prostitutors.

"One issue which will always hold interest is the conflict between Church and State. If one were to set down in some order the objections against the Church on the part of the modern State, they might resolve themselves into these three: firstly, the Church is perverting the nation by its parochial school system, which embodies a different educational policy than the public school, and by her marriage legislation which admits of no divorce, now the generally accepted thing in society; secondly, the Church refuses to give tribute to America, inasmuch as her heart is across the sea, recognizing the Vicar of Christ supreme in matter spiritual, and also because her heart is too much interested in the next world, and not sufficiently devoted to this one; thirdly, the Church looks upon herself as a sort of King in the sense that she claims to be the unique Church of Christ, and refuses absolutely to accept the democratic principle that one religion is just as good as another.

"Such are, I believe, the three principal complaints and charges against the Church today, and to those who urge them I would remind that they are exactly the same charges that were directed against our Blessed Lord Himself in His trail before Pilate."

END_OF_DOCUMENT_TOKEN_TO_BE_REPLACED 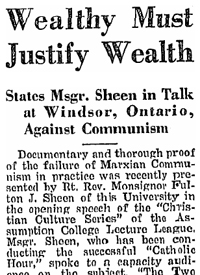 Documentary and thorough proof of the failure of Marxian Communism in practice was recently presented by Rt. Rev. Monsignor Fulton J. Sheen of this University in the opening speech of the "Christian Culture Series" of the Assumption College Lecture League. Msgr. Sheen, who has been conducting the successful "Catholic Hour," spoke to a capacity audience on the subject, "The Two Revolutions." The "Two Revolutions" he explained were the "Revolution of Hate," fostered by Communism, and the "Revolution of Charity," promoted by Christianity.
He also emphasized the importance of the year 1858 in the development of the two revolutions. That very year saw the publication of Darwin's "Origin of Species" and Marx's "Das Kapital"; but it, likewise, saw the apparitions of the Blessed Virgin to Bernadette Soubirous.

END_OF_DOCUMENT_TOKEN_TO_BE_REPLACED 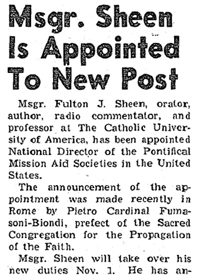 Msgr. Fulton J. Sheen, orator, author, radio commentator, and professor at The Catholic University of America, has been appointed National Director of the Pontifical Mission Aid Societies in the United States.

Commenting on his new post, Msgr. Sheen said, "My entire energies will be dedicated to this work which has the unique value of contributing to the peace of the world through peace of soul."

END_OF_DOCUMENT_TOKEN_TO_BE_REPLACED 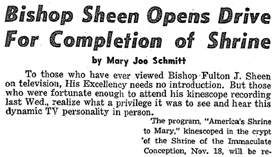 Following the introductory prayer, Bishop Sheen appealed to the capacity audience of over 1,400 to manifest love for God through honoring His mother by completing the Shrine of the Immaculate Conception. The fund drive will be launched Dec. 6 in all Catholic churches of the nation.

Bishop Sheen urged all to contribute to the cause because this National Shrine belongs to all Americans, and everyone is interested in preserving the spiritual and moral foundation of the country. To do this, one must go to God through His mother, to whom the United States is dedicated under the title of the "Immaculate Conception."

END_OF_DOCUMENT_TOKEN_TO_BE_REPLACED

Archbishop Fulton J. Sheen, said to be one of the most celebrated churchmen of this century, will be awarded the University's first President's Patronal Medal and an honorary Doctor of Humane Letters on Wednesday evening.

The President's Patronal Medal, which honors Mary, the University's patron, will be awarded annually to persons who have made outstanding contributions to the Catholic Church.

END_OF_DOCUMENT_TOKEN_TO_BE_REPLACED 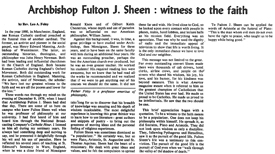 Fulton Sheen was sometimes dismissed as "a popularizer." He certainly was, but so were Plato, Aristotle, St. Augustine and St. Thomas Aquinas. Sheen had the heart of a missionary. He dealt with great ideas and values, and he felt the compulsion to spread these far and wide. He lived close to God, so he looked upon every contact with people in planes, trains, hotel lobbies, and lecture halls as his mission field. Everything was an apostolate. That was why he used the dignity of radio and the immediate appeal of television to show that life is worth living. It is the only immediate chance we have to love God and our neighbor.

To Fulton J. Sheen can be applied the words of Aristotle at the funeral of Plato: "This is the man whom evil men do not even have the right to praise, who taught us to be happy while being good."

END_OF_DOCUMENT_TOKEN_TO_BE_REPLACED

The following Sheen quotations appeared in stories printed by the student newspaper.

"St. Thomas (Aquinas) was interested no less than our modern anthropologists in finding the missing link that will unite creation, and that link is not pithecanthropus, but Christ."

"There are three fundamental cravings of the human heart, namely, Life, Truth and Love."

"We are forced to be intolerant about principles ... Tolerance, of course, is a virtue in the individual - we have no place for bigotry. But on great religious principles we must be intolerant."

"Stop talking of human brotherhood and begin putting it into practice."

"There is nothing so sublime that cannot be prostituted, and even the noble virtue of patriotism may have its prostitutors."

"Democracy is made by the love of God. It owes its origin, sanction and perpetuity to religion, and in the world today where God is most defeated, man is most tyrannical."

The following Sheen quotations appeared in stories printed by the student newspaper.

"St. Thomas (Aquinas) was interested no less than our modern anthropologists in finding the missing link that will unite creation, and that link is not pithecanthropus, but Christ."

"There are three fundamental cravings of the human heart, namely, Life, Truth and Love."

"We are forced to be intolerant about principles ... Tolerance, of course, is a virtue in the individual - we have no place for bigotry. But on great religious principles we must be intolerant."

"Stop talking of human brotherhood and begin putting it into practice."

"There is nothing so sublime that cannot be prostituted, and even the noble virtue of patriotism may have its prostitutors."

"Democracy is made by the love of God. It owes its origin, sanction and perpetuity to religion, and in the world today where God is most defeated, man is most tyrannical."